ISLAMABAD: In a significant move towards averting the threat of delayed general elections, the Senate on Tuesday finally passed a bill providing for delimitation of constituencies on the basis of provisional census results. 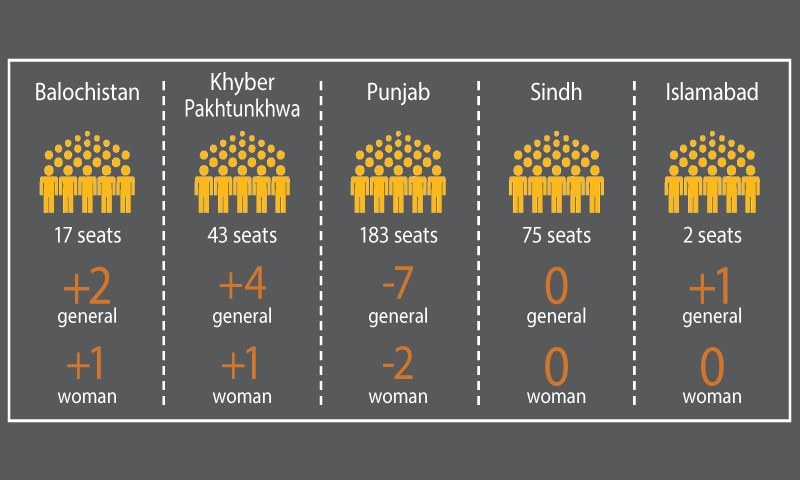 As many as 84 senators voted in favour of the bill. Kamil Ali Agha of the Pakistan Muslim League-Quaid was the only senator who voted against the bill, while the party’s parliamentary leader Mushahid Hussain Sayed entered the house only after the voting process.

In a brief chat with reporters, Mr Hussain, however, claimed that he had supported the bill. He referred to an agreement reached during a meeting of parliamentary leaders with Prime Minister Shahid Khaqan Abbasi and said it would not have been possible without the role played by him and Senator Mir Hasil Bizenjo of the National Party.

When contacted, Senator Agha said he had acted in accordance with the party policy. He said his presence in the house at the time of voting was meaningful. “I had been assigned the duty to remain present in the house,” he said, adding that a lawmaker who failed to follow party policy in voting on a constitutional amendment was disqualified for ‘floor-crossing’.

Saleh Shah was the only senator from the Federally Administered Tribal Areas who voted in favour of the bill, while the rest of seven chose to stay away from the process. Interestingly, the Fata senators were present in the house much before the commencement of Chief of the Army Staff General Qamar Javed Bajwa’s briefing to the Senate Committee of the Whole.

Leader of the House in the Senate Raja Zafarul Haq said the passage of the constitutional amendment bill was essential for democracy and staving off the threats to Pakistan. This, he acknowledged, was not possible without cooperation of the opposition and thanked Leader of the Opposition in the Senate Barrister Aitzaz Ahsan and other parliamentary leaders for their cooperation.

Mr Haq assured the house that the points given by Pakistan Peoples Party’s parliamentary leader Senator Taj Haider on the modus operandi of a third-party audit of provisional results in five per cent census blocks would be implemented in letter and spirit.

The stand-off over the bill had been continuing for weeks as the PPP, which had supported the bill in the National Assembly, abruptly changed its position. Initially, the PPP was demanding re-audit of census results in 1pc blocks, which had been agreed at the forum of Council of Common Interests (CCI). But the party demanded that the blocks be raised to 5pc when the bill was presented in the National Assembly on Nov 16.

When that demand too was met, the PPP had raised objections to the proposed modus operandi for the re-audit exercise. The position taken by the PPP and refusal of the government to meet the demands led to a deadlock which was broken last Friday, when a meeting of the parliamentary leaders was convened by the prime minister where PPP’s all demands were met. The meeting had decided to introduce and pass the bill from the Senate on Dec 19 (Tuesday).

The bill is set to become an act of parliament any moment after a formal assent by the president. The bill also provides for reallocation of National Assembly seats.

Article 51(5) of the Constitution provides that seats in the National Assembly shall be allocated to each province, Fata and the federal capital on the basis of population in accordance with the last census officially published.

There is a consensus among political parties that for purposes of the next general elections to be held in 2018 and by-elections, allocation of NA seats should be made on the basis of provisional results of the 2017 census without changing the existing number of general seats (272) and women seats (60) and retaining the share of Fata (12).

According to the reallocation of seats under the bill, seats will increase for Balochistan (2 general seats + l woman seat), Khyber Pakhtunkhwa (4+l) and federal capital (l+0), while seats for Punjab will decrease (-7 and -2). The seats for Sindh will remain the same.